Little is documented about the history of the Trapper’s Cabin from Commerce City Colorado.  Family tradition states it was built in 1852 and was originally used by trappers in the area of the South Platte River.   It has been in the Blood family for many years and given to the South Platte Valley Historical Society by the Bob Kinney and family.  At one time it was used as an overseer’s cabin for the trout pond which provided trout for the Brown Palace in Denver. 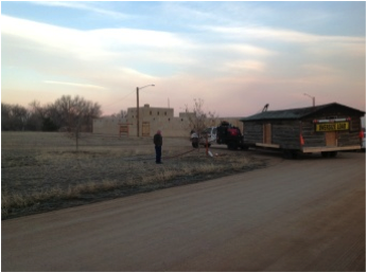 In order to move the cabin, certain improvements made prior to the 1950’s had to be removed.  The first of these was the removal of plaster and lath from the interior.  Next to be removed was the chimney, sink and stove.  Finally the hardwood floor and the plank floor underneath were torn up.

Dawn broke on December 1st as the cabin began the journey to its new home. After snaking through fences and along driveways, the paved road was reached about 7:00 am.  Then within 45 minutes, the final turn was made and the cabin was guided over its resting place.  Timbers were laid down and the cabin was detached from the truck, thus completing the move.  For the next fifteen months, new life was breathed into the cabin bringing it to what you can see today.